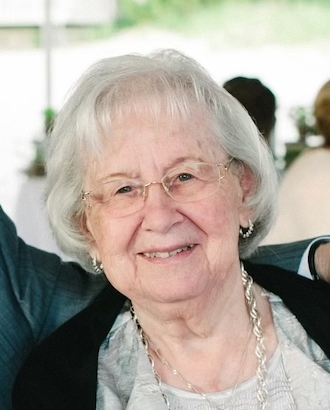 Having lived a full and wonderful life, Jessie Florence Stratychuk passed away suddenly yet peacefully on Tuesday, September 13th, 2022, at Royal Terrace Residential Care in Palmerston. Florence was to turn 95 years old in December of this year.

Florence was born in the Molesworth area to parents Watson & Mabel (Edgar) Brown and would be the older sister to one brother, Edgar, who predeceased her. After graduating from Listowel District Secondary School, Florence attended Stratford Teachers’ College and then taught for several years during which time she met Bill Stratychuk. They were blessed with 72 years of marriage until Bill’s passing on the 19th of April this year. Together they worked the family farm and raised two children, Brian now of Grand Bend and Anne (Richard) Keeso of Listowel. Florence is also survived by one sister-in-law Shirley Brown.

Florence had a keen mind and was forever interested in ancestry, both hers and family acquaintances. She was an excellent cook, Bill’s loyal business partner, watchful mother and bright, hard-working farm girl. She along with Bill operated an apple orchard in Brussels and later, the Listowel Monument Company. For several winters Florence and Bill travelled to Florida where they enjoyed being with a number of Brussels’ friends.

In her 80’s Florence became accomplished with an iPad and would excitedly keep up to date with all her family, in particular her grandchildren and great-grandchildren. Soon she would know more about what they were doing than their parents. Missing Grandma are Lisa Cartwright (Jerry) and daughters Hailey and Ava of Marco Island, Florida, Alan and Jacqueline Keeso and daughter Ezra of Silver Spring, Maryland, Jared and Magali Keeso of Montreal and Abigail (Keeso) and Christopher Hopkins whose little girls are Clementine and Winnifred.

The family would like to express their thankfulness for the caring and professionalism of management and staff of Royal Terrace, Palmerston.

A private family “Celebration of Life” service will be held on Friday, September 23rd, 2022 at Listowel Community Family Funeral Home at 11 am. Interment Molesworth Cemetery.