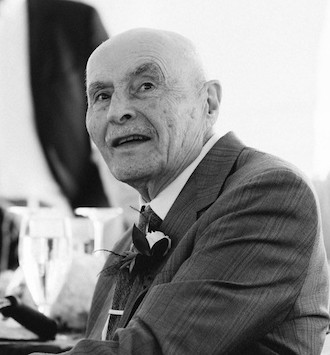 It is with feelings of heartfelt loss that the family of William (Bill) Stratychuk must convey his passing on April 19th, 2022. Born November 7, 1925 and predeceased by his first generation Ukrainian parents, Michael and Anna who had immigrated to Canora, Saskatchewan, Bill was in his 97th year. He was an only boy with six sisters – Albina Gulutzen, Mary Matichuk, Nellie Litowski, Lena Cardiff, Katie Hamilton and Ann Ballantyne who have all since passed on as well.

Having endured the hardships of the Great Depression on the prairies, good farmland became available for sale in Ontario and the family relocated to the Monkton area in 1936. Bill met Florence Brown in 1944, the two were happily married four years later, and soon purchased their own farm nearby. Florence taught school while Bill would eventually go on to also work as a sales rep for a seed company, purchase an apple orchard west of Brussels, sell real estate in the Listowel area and own and operate the Listowel Monument Company. Well known for his strong work ethic, Bill was highly successful at whatever he turned his hand to including baseball and curling throughout his life. He was often asked to be ‘master of ceremonies’ at weddings and family functions because of his incredible ability to hold a room, telling stories and jokes effortlessly. After they retired in 1989, Bill and Florence spent many winters in Florida with family and friends.

Bill is survived by his wife Florence of an amazing 72 years, son Brian of Grand Bend and daughter Anne (Richard) Keeso of Listowel. ‘Papa’ had an undying love for, and immense pride in his grandchildren, Lisa Cartwright (Jerry) of Goodland Florida, Alan Keeso (Jacqueline) of Franklin TN, Jared Keeso (Magali) of Montreal and Abigail Hopkins (Christopher) of Toronto. Throughout his last years the arrival and lives of Bill’s great-granddaughters would give him his brightest days – Hailey and Ava Cartwright, Ezra Keeso (Alan and Jacqueline) and Clementine and Winnifred Hopkins.

Bill received excellent care at the Palmerston & District Hospital for which the family will always be grateful.

A private family celebration of Bill’s life is to be held at 1 pm, Saturday, April 30, 2022, at the Listowel Community Family Funeral Home with interment later in the Molesworth Cemetery.

A private family celebration of Bill’s life is to be held at 1 pm, Saturday, April 30, 2022, at the Listowel Community Family Funeral Home with interment later in the Molesworth Cemetery.
No visitation.