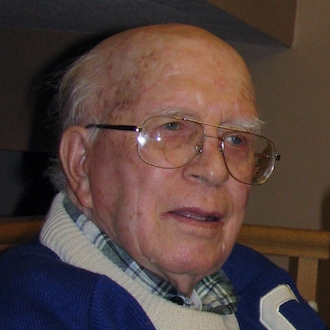 After a life well lived, Richard “George” Leach of Listowel, formerly of St Ann’s and Welland, passed away peacefully in his 92nd year.

Loving husband of the late Willa (Beamer) 2005. Cherished father of Jeff (Janice) and Rob (Jane). Adored grandfather of Jason (Kaitlin), Craig (Katie), Connor (Larissa), Larkin and Zoe and great grandsons Clement and August and nieces and nephews. Predeceased by his parents George and Gertrude Leach and his sisters Ellen and Ada.

George grew up in Welland and married the love of his life Willa in 1952. George was a teacher in the Welland area and finished his career teaching geography at Welland Centennial Secondary School. When starting their young family George and Willa moved to their farm near St Ann’s where they raised purebred sheep until 1990 when Willa’s illness initiated their move to Smithville. After Willa’s death George moved to Listowel.

George was an excellent athlete competing in every sport available. He was known to beat his students at one-on-one basketball using his tricky left hand hook shot, even well into his 50’s. Later in life he would spend many hours at Lookout Point Golf Club in Fonthill playing the game he loved and played it well.

George impacted many throughout his life with his teaching and coaching of basketball and fastball. He was a respected mentor to many area youth.

A lifelong Leaf fan, George would point out that during his lifetime the Leafs won 11 Stanley Cups. Even though the Leafs was his favourite team, his favourite players were his five grand kids. George, and Willa when she was alive, got immense pleasure following them all over the province to support and cheer them on at their hockey games and tournaments. Family was very important to George and Willa.

At George’s request there will be no funeral. He asks, if you wish, to make a donation to a charity of your choice. His family would like to thank the staff of Rapelje Lodge in Welland for the wonderful care Willa received during her time there and many thanks to the Doctors, nurses and staff at the Listowel Memorial Hospital for the exemplary care he received.